Here's what we got:

So, this is what I have submitted as my homework today. I definitely learned about our history. Part of it because as my teachers and parents would tell me, Philippine history is rich. There are tons and bits of pieces of information that a lot of us do not really know plus the many details we already know.

Posting in behalf of my daughter, K.

This blog has been quite lonely for sometime now and I have been reminding K to visit and  try to post at least a photo or two of what she's been doing at school. And since she either forgets to or neglects to, I will do the honor.

Last August, K got sick and had to absent herself from school for more than a week. When she got back, there were a lot to catch up - notes, lessons, projects. Since she was advised not to tire herself much especially during their breaks and P.E. time, you'd find her just sitting in a corner. She was even half-hearted in joining the Filipino declamation for their Linggo ng Wika celebration. Though she's memorized the piece, she was not present at school when the final list of participants were chosen. She just told herself that it's okay, there's still a next time. Surprisingly, one of the female participants backed out just 2 or 3 days before the contest, K replaced her. With so much enthusiasm, she told me about it. She didn't win but was happy with yet another declamation experience on stage...with a friend. This year's piece was entitled: "Sino Ang Mas Mahalaga? Ang Ina o Ama"? (ooppps! I think this isn't the exact title but it was a debate on that topic).

Come October, K portrayed as Black American along with some of her classmates for their school foundation day presentation. I am keeping this collage small since she didn't really want me to post it, actually, was forced to pose in front of the camera. He! He!

With this presentation, K learned about discrimination and how important it is to value a person despite his color. I have reiterated to her that one's physical attribute should not be of that importance, she should look in the person's heart. Our heart's desires and willingness to reach out and help others (with a smile!) makes us beautiful.

I was once doing my Pinterest job when I saw a pin - it was a girl with lovely curls! I showed it to Keanna and she asked me to click on its link to know how we can get the same curl quality since her hair really takes time to curl up. We then found out that they used the Bontu knots trick. Besides the link we visited, we searched for YouTube videos of Bontu knots too. And after work, we tried it. 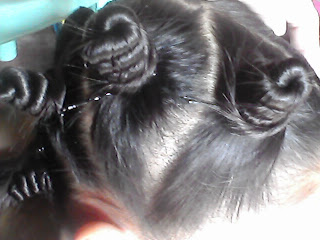 Keanna's hair had to be a little wet and we applied styling gel just to be sure that it will result to real curls and not tangled hair. =D 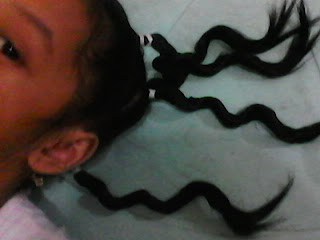 After few hours (8 hrs maybe), her hair was not as curly as the girl in the image we saw but she was already happy of this cute curls as a result of our first attempt. The photo above shows her hair after removing the knots. I had to remove the rubber bands as well. The "after" photo has no good quality so I'd rather not add it in my post. But I will do so next time we try this again and as soon as our digital camera's battery's replaced.

By the way, I tried this too on her little sister. I divided Roey's hair and tied it like pigtails and then made the Bontu knot. Here it is... 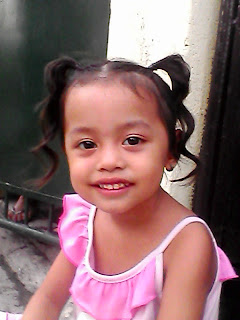 For Mommies out there, go ahead and search for video tutorials on how to do the Bontu knots on your little darlings. Hope you can also share photos. Thanks for dropping by!
at 11/14/2012 09:50:00 AM No comments:

I missed my blog!

I have been telling Mommy that I want to blog and she has given me computer time but it was me who was not able to post anything. I enjoyed group chatting with my classmates and playing MyTiki World. =)

Not long ago, Mommy promised me that she will replace my old mobile phone with what I have been requesting, a phone with MP3 player and TV feature too. She agreed and said that she will just give my old phone to Lola Mely, her Aunt, so they can contact each other. Before I got a new phone, Mommy lost hers. I felt sad for her but also got worried that the new phone she promised me will have to be set aside. Good thing, Daddy volunteered to buy me a new one. He asked Mommy what phone unit she wants him to give her as his birthday gift but Mom said she will save first for the phone she really wanted. She is already happy that I got to have a new one. Ahhhh! I love you Mommy! 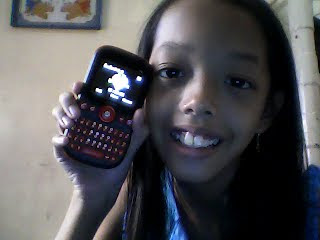 See how morena I am in the photo above? I got my skin color from my Daddy. But, I really want to have a fairer skin like Mom. She would not allow me to use whitening soaps and lotions yet because of my very sensitive skin but I was excited as I arrived from school yesterday with a loot from SkinWhite. 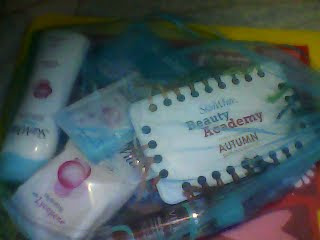 The SkinWhite Beauty Academy went to visit our school, Marian School of Q.C. and I have learned a lot about my physical appearance. We were somehow examined and I have learned that I have an H body shape. Mommy was right that I have a heart shaped face. I was also told that the length of my arms are just right but I have short legs. And was also told that shorts are best to those with short legs than those with long legs. My skin color also belongs to what they call "Autumn" skin color group. I was given a color palette which we could take along when buying clothes so I can check which color will look good on me. All students who attended the talk (I told Mommy it was like I attended a seminar, hehe!) were advise to start sorting clothes. Set aside the ones that are included in the color palette given to us, the ones that aren't there and the ones for donation. =) I m going to sort my clothes with my Mommy after our 2nd periodical exam period.

Here are the some photos we had last Mother's Day as we visit Mama. As always, my little sister is so kulit and game to pose in front of the camera. =) 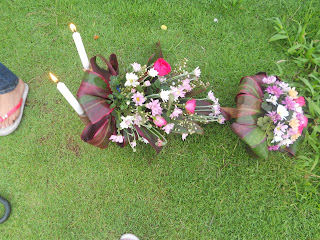 We brought flowers and lighted small candles for Mama dear. Besides Mother's Day, it was also her birthday last May 6. 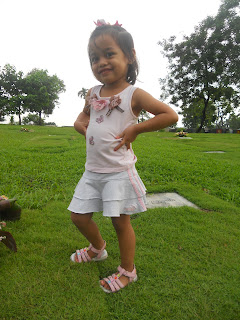 Roey as she made a cutie pose . 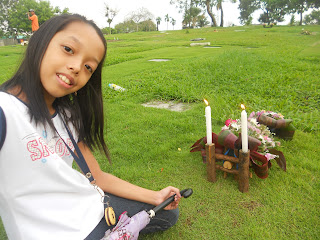 And that is me, of course.

We did not stay that long at the cemetery since it was a little cloudy we thought it will rain but I have my umbrella ready. Hehe!

Hi Everyone! Thank you for visiting my own blog. I will keep this site as my online journal. I'll try to keep this updated as much as i could.
This site will feature things about me and my sister Roey. I will post activities, my favorite stuff, books, drawings, my life as a sister, experiences and everything there is that interests me. My Mom has already taught me how to navigate and use my blog but she is still going to help me with my posts. Thank you again and may you find a SMILE curved in your lips upon your visit.