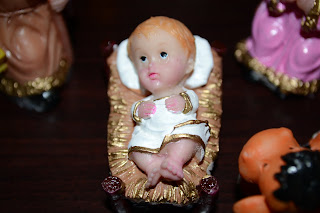 December means Christmas and Christmas is the celebration of Jesus Christ's birth. Just like when He was born, gift giving has already started... from the three kings. Each of them brought Him something special.
I once heard Mommy that she will start making the list of gifts to give to kids that are special to us. Roey and I were first in the list. For friends, boys are out numbered by girls but for both my parents' relatives and Godchildren, there are more boys than girls. I also think that Mommy is right, that it is harder to find baby boy gifts than looking something for girls. Good thing we found great gift ideas at The White Company because it has almost every clothing item you may need and even has a wide variety of Christmas stuff to choose from. And now that Christmas is just around the corner, I am glad that we are almost done with the gifts. Too bad we don't have a giant Christmas tree because it will not fit inside our little home. =)
No matter how grand the season may be, let us not forget the true meaning of this celebration... LOVE which is also Jesus Christ. As the song goes - "For God so loved the world, he gave us His only Son. Jesus Christ our savior, His most precious one." I am looking forward to Christmas day and the gifts of course, but I will never forget my GrandMama (may she rest in peace) who has taught me what Christmas is all about.
Have a happy gift giving, and merry Christmas everyone!
at 12/03/2011 02:48:00 PM 17 comments:

Mommy won an Apple itouch last 2007 at the Convergys Christmas party and we have been using it until now. It's one of the 1st generations of the gadget which is in 4th gen now. Mom decided not to sell it even if her friends kept asking for her to name a price. I am glad she didn't sell it. It still look new and now, it has so many games and applications Roey and I get to enjoy.

Jail break, that's the term Mommy used when she brought it to a cellphone repairman. That was done to reset the ipod and install applications and it was only after more than 2 years since she received it. After just about 3 months of the first jail break, the ipod won't turn on anymore and won't even recharge.

Mommy said the itouch is in hibernating mode. Ha! Ha! Last October, Daddy brought the ipod with him and returned it fixed. I was so happy and excited. But, I am only allowed to use it during weekends and when allowed on weekdays, I should have already finished my assignments. I love playing Cooking Dash, Mood Detector, Cooking Mama, Rollercoaster Rush, and Cut The Rope.

The only problem now is that the USB cable is no longer working that we can't recharge it anymore. Good thing, when we visited Tita Divine and Vin, we were able to borrow a USB charger. I was able to use it again. Thank you Tita Divine & Tito Boyet.
** Update:
As I woke up this morning (Dec. 03, 2011), Mommy said that Daddy bought a new USB cable to replace the damaged one. Yehey! Guess what? The iPod is currently syncing new more applications. I feel happy, it's Christmas!

Diary Of A Wimpy Kid

My second cousin had this box of books for her birthday. She has started reading it and I liked it too. I've heard good reviews from my classmates about the Diary of a Wimpy Kid and told mommy that I am interested in reading the books too. She told me to save, hehe! 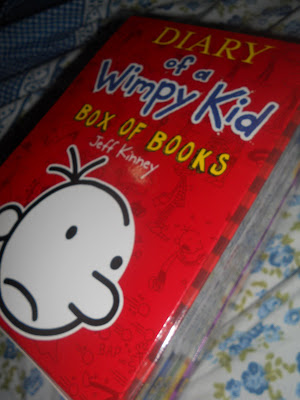 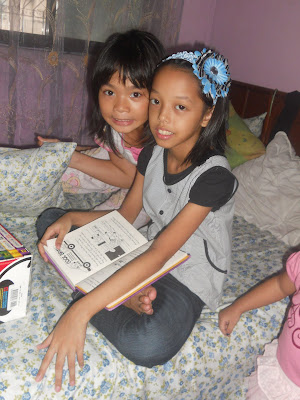 Mom said I am so blessed to have an instant BFF because she's an only child. She's dreamed of having a sibling but there are things that aren't really meant to be. But, she said it has been better that way because she has gained so many friends and still had a BFF, my grandMama, her Mom. 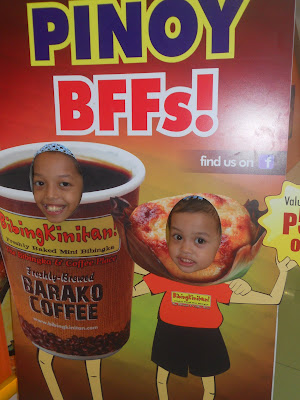 Mom brought us at SM Novaliches one Saturday. I remember that we had to buy some art stuff for a school project. She also ended up buying us 2 new play mats because it was on sale at 50% off. There was this standee that we found cute and Mom decided to let go behind it and took a photo of us. So cute, right? 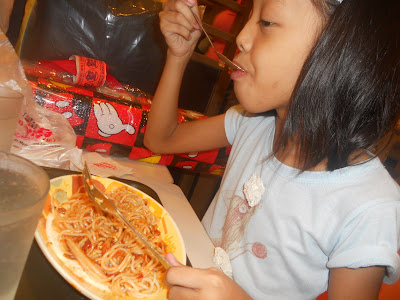 We also has our late lunch at Jollibee. My BFF Roey enjoyed because she's so love Jollibee, the mascot. 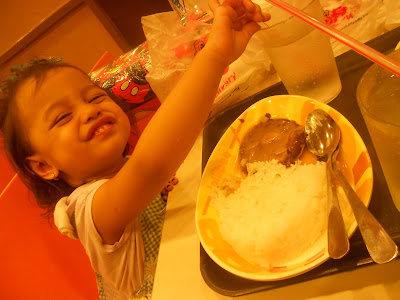 This little person is totally playful and sometimes unpredictable but still very charming and adorable. I love my BFF, my sister Roey.

Hi Everyone! Thank you for visiting my own blog. I will keep this site as my online journal. I'll try to keep this updated as much as i could.
This site will feature things about me and my sister Roey. I will post activities, my favorite stuff, books, drawings, my life as a sister, experiences and everything there is that interests me. My Mom has already taught me how to navigate and use my blog but she is still going to help me with my posts. Thank you again and may you find a SMILE curved in your lips upon your visit.